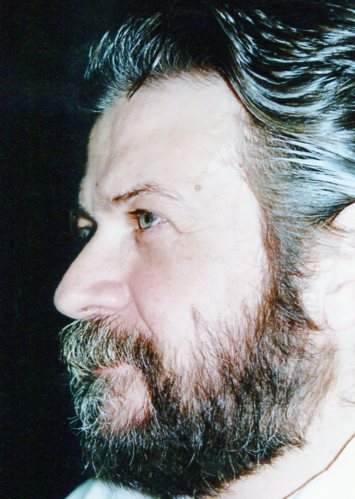 Riccardo Gramegna has not received any gifts yet

Why are you interested in the Gandhi-King Community?
i share the dream and the vision, principles and values, practices and goals
I took care of the needs of the needy throughout my life until I became a needy myself. It was my choice… voluntary poverty… one of the four legs on which stands a non-violent life. Service to the last… share all what you have with the have-not and I did it. Now I am … I have nothing to loose… my life? I am not afraid of death… I know I won’t die as I know I am not my body… I am a spiritual being having a human experience. Truthfulness? I have the gift to see the truth underneath the surface… in the papers, in the news, in politics, economics, religion, I understand how and why the show is different from real life and I see… truth is being unveiled… and Truth shall set us all free… from greed, competition, war, geopolitical boundaries, states and bureaucracy, hunger, exploitation and slavery, fear…

Thank you for the comments on the Gandhi King site.  I have not checked it for awhile.  Also thank you for the statement about Namaste.  It is something we were looking for.  Have you checked out the pilgrimage of peace page at

I need to check out our page.  Bob

Eva said…
Thanks for your warm welcome Riccardo !!!
Are we friends from old iPeace days ?

Yes, the Italians are sad turn with their government. But the French are not doing better with its friendly U.S. government chief. Ha, ha ....

Dr. Halim A. Mustafa said…
Call me at my mobile phone (650) 222-6984. I'd like to speak via phone or meet in person to discuss peace matters and ways we can reach greater audiences internationally.

Susan Redmond said…
thank you Riccardo for the video - very concise and a strong message! Susan

Laura Dussault said…
Here is the latest newsletter from the Center...
http://www.uri.edu/nonviolence/newsletter/2010/Spr_Sum2010NewsletterCNPSFinal.pdf

Jai Jagat! Victory to the Whole World!
Vinoba Bhave joined Gandhi when he was very young, about seventeen, while Gandhiji was already shaking India’s consciousness with his writings, speeches and actions.
Many, at that time, left their villages to join the revolution. Young Vinoba was one of them and he was acknowledged by Gandhi for the purity of his heart and his extraordinary spiritual strength.
He became the closest friend and advisor of Mahatma Gandhi, whom choose him as the first individual satyagrahi. After Gandhi was assasinated, in 1948, he led the Sarvodaya movement towards the 'constructive programme' of Gandhi till his death in 1982.
Acharya Vinoba Bhave walked on foot, from village to village in India, for seventeen years, collecting huge donations of land from the landlords and redistributed it among the landless, for selfsufficiency and freedom from slavery and hunger through an outstanding constructive revolution: the Boodan and Gramdan movement.
Not many, in the west, know about Vinoba and his outstanding contributions to humanity, but on the web you can find pages on him, on boodan and gramdan... and more will come on Jai Jagat.

The dream of Vinoba was about a world without geopolitical boundaries, no religious divisions, no separations among all human beings, all equal in the Love of the same God.
He had a vision of the world as one village, where all humans would live as a family, with Love, Truth and Compassion inspiring their relationships.
He promoted the decentralization of power to the villages {gramswaraj}
In his Ashrams all important decisions were taken unanimously.
One World consciousness pioneer he had a vision of the fall of all nationalisms and the fusion of humanity in one nation, the planet and one citizenship, humanity.

In 1957, the first of November, he was greeted at at huge gathering of the Sarvodaya movement by the crowd shouting.. Jai Bharat! Jai Bharat! Which means Hail India, Victory to India!, slogan that was very common in post-independence time.
In that occasion Vinoba told the crowd that, from that moment on, they should have greeted him and each other with “Jai Jagat!” victory to the whole world, victory to all. 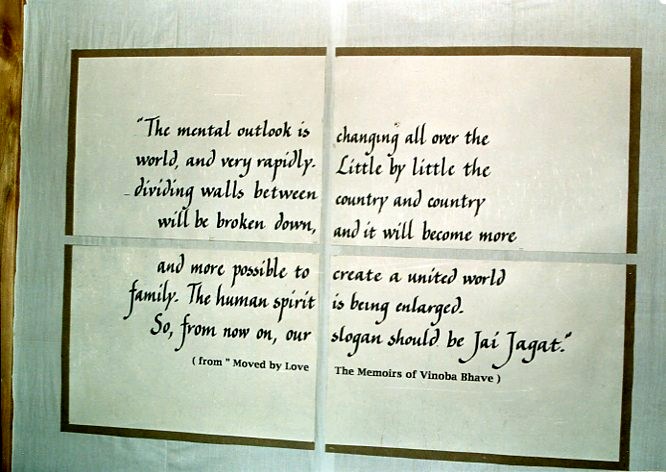 On the 11th September 1994, at Vigyan Bhavan in New Delhi, with the partecipation of the President of India and Ministers of the Indian Government, it has been inaugurated a 1994/1997 programme named 'Jai Jagat Mahotsav' for celebrating:
-the birth centenary of Acharya Vinoba Bhave
-the 125th anniversary of the birth of Mahatma Gandhi
-the Golden Jubilee of Indian Independence

On march 26 I have sent an email to Arya Bushan Bhardwaj , the Founder of Gandhi In Action International….

Dear Arya, I have been following the evolution of the situation in Libia and
felt compelled  to think of something that could be done as Gandhi In Action in
Europe... Shall we protest? and organize some sort of "stop the war"
manifestation? Are there groups and NGOs moving in that direction we can join
and support?... After some search on the web, I…