In the Lalita Sahasra Nama, the 1000 names of Lalita or the Divine Mother, there are several references to the '1000 armed One' the '1000 footed One' the '1000 headed One.' This we surely saw today. Our Holy Mother Amma made a huge initiative at the 57th official b-day celebs. She wants to see Indians become aware of social cleanliness and hygeine. She said, as only a true Mother can:

"India is an atomic power. India is scientifically and economically advancing. Many reports say India is poised to be the third largest power in the world by 2025. But in terms of cleanliness, we still are in diapers." "The lack of cleanliness in our roads and public bathrooms and toilets is proof of this." (from: www.amritapuri.org/10509/globalization.aum andwww.amritapuri.org/10476/clean-place.aum As seen on September 30, 2010.)

Amma said she would start with Kerala, then move the work to the rest of India. And start She did. Since Her Birthday, hundreds, if not 1000's of steel drum barrels have been placed on all the streets, backways, on national highways. People living in 2 km stretches are creating comittees, to see to it that their little stretch of road stays clean. For those that want, the ashram is building public urinals and toilets in these areas, to encourage people to stop using the roads and paths. The Ashram is giving away millions of handkerchiefs in 3 absorbencies, to encourage people to use the cloths and re-wash them rather that spit, clean out the nose, etc. in the public. Through this simple medium of social consideration, many of our problems, including the 'not-seeing' of the poor can be solved.

Today was 10-10-10, which I heard one ashramite say is an incredibly positive number in numerology for Spiritual Warriors. ( Jai Dharma!) It's the day of the global work party with 350.org. The 350.org umbrella has gone global and increasingly deep throughout the planet. Last year, their initiative for Climate Action Day on Oct. 24, had around 5000 registered events, planet-wide. It was their first call, a prep to the UNFCCC COP-15 in Cophenhagen, and we had one here in Amritapuri too. Last year was the largest non-political event in human history. This year, they broke all expectations with registrations of over 7300 events world wide. People have done and are doing all kinds of wonderful, unbelievable things together...each effort is spreading awareness. For example, good ole President Nasheed in the Maldives installed solar panels on his 'white house.' There were beach cleanings, tree planting, cycle riding, you name-its going on all over. The lamp is being lit in a very big way, for the Earth, our Mother Earth, transcends all the stupidity we have divised to divide ourselves up into itsy-bitsy pieces.

It began in Amritapuri at 7 AM with the Nuns, sorting all the trash that has been collected since the birthday time, into all manner of categories for recycling. To give you an idea: soft plastic, hard plastics, glass, shoes, tetra boxes, compost, foods, sanitaries, batteries, milk plastics in another container ( and having milk in plastic is awful, tastes AWFUL, and its no wonder at all that most Indian children can't stand milk, if they have to have the horrible plastic one) electronics, metals, cloth, pill sheets (its really amazing how many of us must be taking drugs for some reason or another) and more....much of it is hard plastic. More plastic than paper. You see alot of the ways our education and thinking has gone wrong in the waste. Like those little plastic soccerball-look ice-cream containers. What idiocy. And I'm sure that who ever came up with that gimmick was college educated. Yikes. Have we gone wrong. Trash, sorting trash, teaches alot.

Most people went to the roadside pick-up. Reports from that arena said that local people were very touched and enthusiastic to help. It just shows, NO ONE like to live in a mess. Given a chance and a little support, a little nudge, we can all start to move in a better direction. So, Its happening like wildfire in this area. The autorickshaws joined the force, carting people and garbage, the police commandeered a JCV for burying what could be buried and promised to render all support possible. People were very keen, its been a huge shift in awareness, just like that. Amma often gives the analogy of turning on the light in a dark room. Once the light is one, the darkness simply vanishes. The light has turned on for India, with this move by Amma, big time.

We got into a neighbors boat and pulled out several sack of hard plastic and thermocol from the backwaters, but didn't have much time, as we had gone to the sorting party first.

When we got to sorting around 10 AM, it was really pumping, with music and enthusiasm. Bags that had been sitting for nearly 2 weeks were worked through. A truck was loaded with all the different sacks of recycling....

I mean, its just incredible, unbelievable how this whole idea, of Clean India has caught on.

Our human natures are so fickle, we really need ethical support and guidance to do the right thing. I remember when we were up in Leh, I expressed to my hosts that I was dismayed to see the little glacial streams that lace through Leh being fouled with Lay's potato chip bags, etc. (such a worthless product, with such long lasting, damaging production and waste! ) The Bihari people were promptly blamed for starting the degradation that now everyone, including the Leh Ladakhis did, as they felt there was no point keeping the waters pure, they were already fouled. I think this is human nature. I venture to suggest, that I am certain, there was a time, in the recent distant past, when NO ONE would think of cutting down a whole tree. Take a limb, OK. but the whole TREE? I'm sure, we had a massively greater reverence for Nature before. But then, someone got greedy, and grabbed it. And everyone soon joined the bandwagon, and soon it became fashionable to have lovely wood floors, made out of TREES. And all manner of wanton wastefulness, grabbing and destruction began pell-mel.

Well, with all the difficulty we are making for ourselves on the planet, the mass extinctions, etc., we are surely returning back to expressing that awareness. Holy Mother Amma said something in the interview that makes up Man and Nature, that I think speaks to us in what will be our evolved future:

"None of us would consciously injure our own body, because we know it would be painful. Similarly, we will feel the pain of other people to be our own when the realization dawns within us that everything is pervaded by one and the same Consciousness. Compassion will arise, and we will sincerely wish to help and protect all. In that state, we won't feel like plucking even a leaf unnecessarily. We will pick a flower only on the last day of its existence, before it falls from the stem. We will consider it as very harmful to the plant, and to Nature, if the flower is plucked on its very first day due to our greediness." ( Page 24, Man and Nature.)

'Gandhians' who came to the Ashram and saw the massive shift in human consciousness in the surrounding areas, cried out, "Gandhi Lives!" This is the blurb:

Amritapuri 10-10-10: Most Divinely Inspired, Most Massive.

Today, the ABC (Amrita Basic Cleanliness) program, Holy Mother Amma's initiative to establish social cleanliness and hygiene in India, was kicked off with a meeting of representatives from all over Kerala. Clockwise from Left: 7AM Nuns processing student collected garbage for recycling; Nuns learning how to ride cycles for picking up the trash from bins placed within biking distance of M.A. Math; The backwaters plastic removal; An international cast sorts trash; A trash can placed by students of Amrita Vishwa Vidyapeetham as part of "Clean Friends - Amala Bharatam;" Swami Jnanamrita meets with local community leaders to establish new social hygiene practices.

And here is the conglomerate photo we made for 350.org site of some of the 1000 arms, legs and heads of That Mighty One. 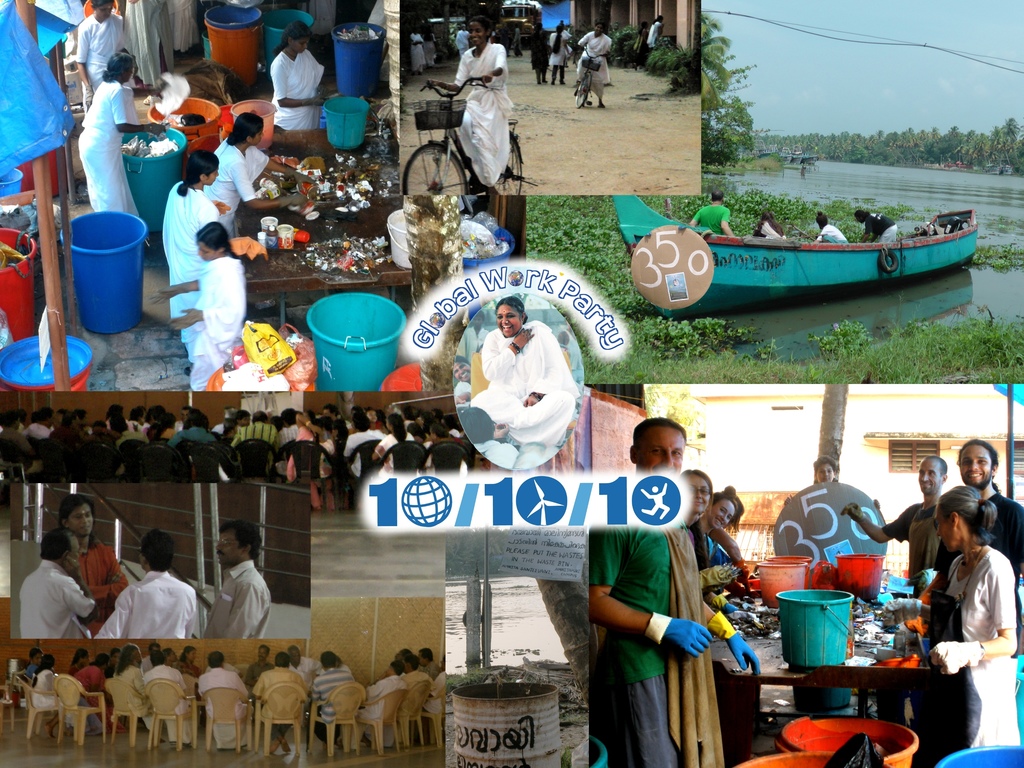