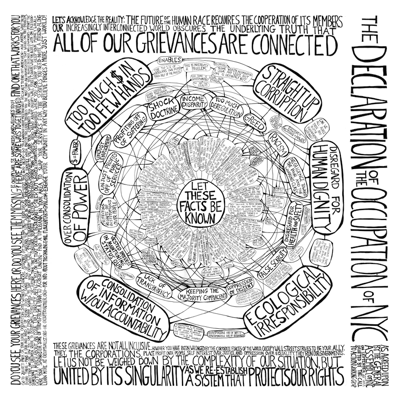 The question of demands has been contested ever since Occupy Wall Street began last September. Do the Occupiers have any? Should they? Does making demands confer undeserved legitimacy on the powers that be? The word “demand” can mean something different for every ear that hears it. It may be clarifying, therefore, to make a distinction between two different kinds of demands a movement might make, transactional and transformational.

Transactional goals are immediate and concrete achievements that can be won relatively rapidly: saving a home, or reaching agreements with banks about certain reforms. They are changes that take place in the here and now, benchmarks, successes that can propel a movement forward, unifying and sustaining the involvement of participants. Transformational demands, on the other hand, are longer-term, aspirational and transcendent.

To Jeffrey A. Ordower, director of Missourians Organizing for Reform and Empowerment, if some of the groups with whom he works could win $250 billion in principal reduction for homeowners, he would consider it more transactional than transformative—because as he put it, “we are still applying arbitrary pricing to a bundle of bricks and mortar.” Some transactional wins might look like less of a transaction. Take, for instance, Rosa Gudiel’s success in putting her story onto the front pages of Los Angeles newspapers for several days, as she fought for a reduced monthly loan payment after her brother died in the midst of recession. A catchy slogan was heard in southern California: “Let a thousand Rosas bloom.”

While students organizing for reductions on their tuition are making transactional demands, they may simultaneously be working toward the transformational demand of a universal right to free or affordable education. Similarly, while the Occupy movement’s anti-foreclosure actions make the transactional demand that a given family not be evicted from its home, such actions are motivated by the goal of transforming the mortgage system as a whole.

Let me reflect on further examples for each.

Nonviolent independence movements in the Baltic states of Estonia, Latvia and Lithuania became visible in the late 1980s. In 1939, Hitler and Stalin colluded in the Molotov-Ribbentrop Pact, containing a secret protocol that provided for the partitioning of Poland, Finland and the Baltic states between Nazi Germany and the Soviet Union. In June 1940, the Red Army invaded the then-independent republics of Estonia, Latvia and Lithuania, putting them under military occupation. The Soviet Union’s forcible annexations were never recognized by international powers. Established national flags, traditional songs and symbols were banned. Of a total Baltic population of 6 million, more than half a million disappeared with deportations eastward. Almost five decades after the pact was signed in Moscow, Baltic citizens began to organize against it.

As I have documented elsewhere, in parallel movements moving at different paces and interacting with other forces, Estonia, Latvia and Lithuania would win independence from and take civil resistance into the Soviet Union, beginning its dissolution.

A transactional moment came about soon after November 18, 1988, when local officials in Lithuania’s communist party-state legalized their old national anthem and historic flag. The Lithuanians went on to grant themselves the freedom to commemorate Christmas for the first time since the shroud of Stalinism had descended. When darkness fell on Christmas Eve, the people of Lithuania doused their houselights and lit candles in their windows. In unlit cities and villages across the country, hundreds of thousands of tapers flickered with a symbolic Christmas unification. A referendum in every way but name, this coordinated action made clear their desired independence from the Soviet Union. Pulling together, they aroused their energies to continue, while indicating that further mobilization followed. Enacting freedom of worship signaled noncooperation with Soviet hegemony. The transformation of Lithuania could be said to have begun on March 11, 1990, when it became the first Soviet socialist republic to declare its independence.

Years before the Lithuanian candles sputtered, at the Lincoln Memorial in Washington, D.C., Martin Luther King, Jr., on May 17, 1957, spoke on the third anniversary of the U.S. Supreme Court’s decision desegregating public schools.He said that by giving the vote to African Americans, who had been legally disenfranchised in the southern U.S. states, the entire region would betransformed: “Give us the ballot and we will transform the salient misdeeds of bloodthirsty mobs into the calculated good deeds of orderly citizens.” In referring to the white-supremacist vigilantes and terrorists whose random violence could strike at any time, terrorizing whites or blacks, he discerned that the entire southland of the United States would thus be changed and bettered for all of its citizens. While the civil rights movement was transactionally seeking basic constitutional reforms for black citizens, the South as a whole could be transformed, reconstituted in another form, so that all of the parties could benefit.

Within SNCC, in our endless debates on strategy and policy, we often talked of how ultimately (despite severe reprisals meted out to local black communities) racism could one day be more effectively lifted in the South than elsewhere in the nation. Although it took a decade to achieve the most elementary reforms and codification of rights for African Americans, whole states across the southern map ultimately profited, as did finally the entire nation. Certainly, white southerners such as Jimmy Carter and Bill Clinton could never have been elected from an un-altered South.

Nonviolent action is intrinsically transactional and interactive, changing the power relationships between the parties, and under certain circumstances it is capable of substantially transforming a conflict. It had the capacity to aid the ending of military occupation in the Baltics and the Eastern bloc, and it can help people to avoid what Martin Luther King, Jr., in the Lincoln Memorial speech, abhorred as “the temptation of being victimized with a psychology of victors.” Successful nonviolent action often depends on having both transactional and transformational demands working in concert; all the better if the difference is internally debated.

This distinction may be useful for Occupy and its countless spinoffs. Each specific group may need to make its own definitions. Seeking transactional steps could mean fortifying networks of co-ops, adopting local currencies and strengthening other alternative economic systems; prosecuting those who have created situational poverty and made a Dante’s inferno of housing and mortgage markets; or testing whether legislated regulations work. Transformational calls may be harder to articulate: when one grows accustomed to injustice, the words with which to hope for even basic rights can seem elusive.