Support the Making of the documentary: Martin Luther King, Jr. in Palestine 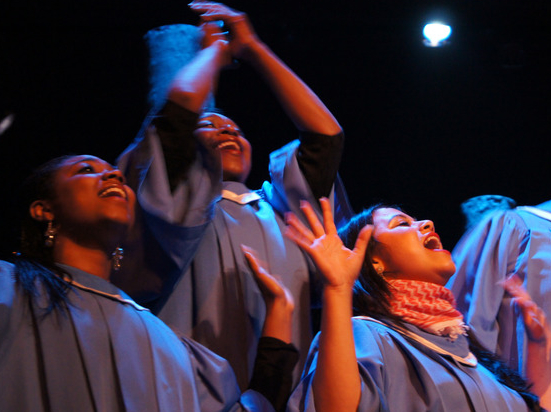 Support the making of Martin Luther King, Jr. in Palestine, an upcoming documentary by award-winning director Connie Field about the nonviolent movement in Palestine, the bringing of Dr. Clayborne Carson's play Passages of Martin Luther King to Palestine, and its performance by the Palestinian National Theater. The film features Gandhi-King Community member Fadi Quran. The film has 45 days to raise $30,000 on kickstarter.com, a project incubator site. They have raised nearly $15,000 already and have until August 27th to raise the rest. View the trailer to the film, add your support & help spread the word!


In March of 2011 we went to Palestine with Clay Carson, who runs the Martin Luther King, Jr. Institute, to film his play about King performed by the Palestinian National Theater and an African-American gospel choir. It was presented to audiences all over the West Bank and it was an incredible journey! This is a great story that can reach new audiences who would not necessarily come see a film about Palestine, incorporating the inherent drama of the theatre and propelled by the foot-stomping rhythms of gospel music. It was an intense cultural exchange between two peoples encompassing the joy of new friendships, creative collaborations and eye opening experiences. No one who participated remained unchanged.

We traveled through the Holy Land that the Christian choir were so passionately excited to see, as they were introduced to the other side of the land where Jesus once walked: a man whose front yard has been bisected by the Security Wall and whose children have to play in the dust of its continued construction; the ease with which they as foreigners were able to pass through checkpoints while their Palestinian counterparts took hours to navigate the same distance; a home which had no water because a settlement had taken over their well, where Palestinian women teach them songs in Arabic and join them in singing American gospel songs. And yet, amidst the hardships of occupied life, the choir is greeted with food, humor, and generosity, a mixture that brought some of them to tears.

We also captured the growing non-violent movement of young people in Palestine, who are much like their peers in Egypt and Tunisia -- bright, well-educated, social media savvy and deeply committed. They are on the move, changing hearts and minds.

Our film can be an effective way to bring a fresh approach to opening minds to the realities of Palestinian life under occupation and introducing people to the young Palestinians who are changing the landscape non-violently.

Changes are sweeping across the Middle East. Can this be a time when a peaceful resolution can come to one of the most emotionally charged regions of the world? Can a story such as ours, told from a completely different perspective than has been told before, open hearts and minds? We think it can.


For more on the film & other work by Clarity Films check out their website: http://www.clarityfilms.org/.

To read more about Passages of Martin Luther King in Palestine and view photos of the making of the play, check out Dr. Carson's blog, A History of a Just & Peaceful Future.